101 Career Tips You Can Learn in 3 Seconds 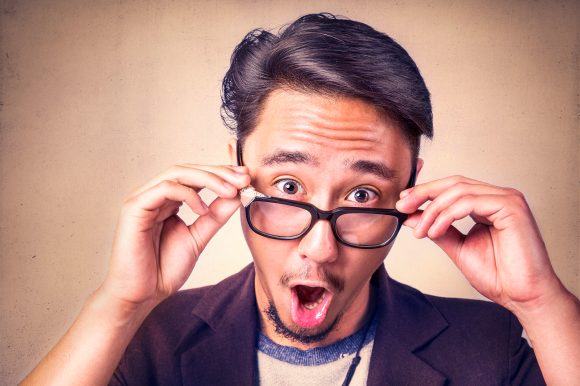 We have just came across a fantastic article with 101 Career Tips and we could not resist to share it with you. If you implement all 101 suggestions into practice, you will realise how easy and pleasant career development can actually be!

We are presenting you with the first 5 – find the rest of the tips by following the link at the end of the article!

1. A first impression is made in less than 30 seconds.

2. Want to boost your charisma? Focus on energy and optimism.

5. No matter where your stress is coming from, it’s not doing you any good—until you learn how to address it.

Check out all of these super useful tips and techniques! 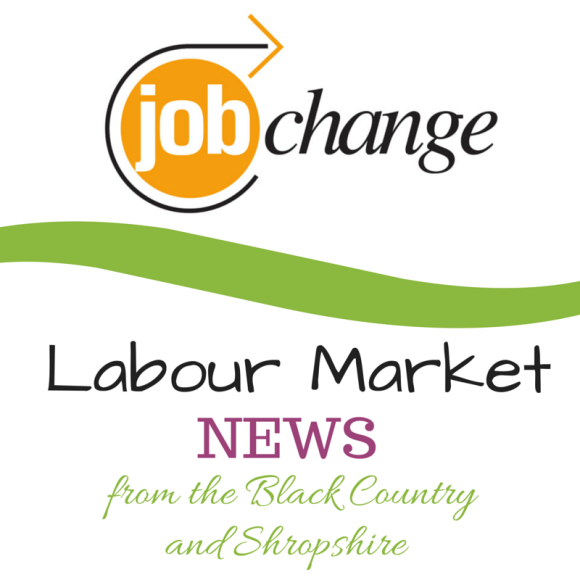 1. Walsall food store opens to create 30 jobs: The first phase of Walsall’s Old Square Shopping Centre regeneration scheme has been completed with the launch of a new food store, creating 30 jobs in the town.The Midcounties Co-operative Food store opened in Walsall town centre on Friday and is the final part of a multi-million pound project to revamp the St Matthews Quarter and attract further investment. http://goo.gl/yaQmYX

2. Travelodge to create 450 jobs at 19 new sites: Hotel chain Travelodge is to open 19 new sites this year, creating 450 jobs.Chief executive Peter Gowers said:”Our recently completed £100 million hotel modernisation programme has raised quality levels and led to strong growth from business customers to complement our traditional strength in leisure travel.We now see opportunity for hotels in 250 further locations across the UK and with early positive development momentum at the start of 2016, we are well positioned to deliver further strong growth in the years ahead.” http://goo.gl/IQc1rw

3. 20 new jobs created as Co-op set to open £650,000 Cannock store: The £650,000 new Co-op store will open on Thursday in Stafford Road, Huntington.It will be open between 7am and 10pm every day and include an in-store bakery, cash machine and Costa coffee dispenser. http://goo.gl/HToQnK

4. New First Choice Cannock HQ set to create up to 100 Jobs: Staffordshire County Council recently approved plans for the business to move from its current base at Swaffield Park in Hyssop Close in the town to the Kingswood Lakeside Business Park so it can expand its headquarters with more than 100 jobs set to be created. http://goo.gl/QoLpTU

5. 200 jobs created at West Midland Safari Park: Around 200 jobs are up for grabs at West Midland Safari Park as the attraction launches its latest recruitment drive.The park is looking to bring in new people in preparation for its summer season which starts in February, with positions available in a range of areas.Around 50 of the vacancies are within the theme park.Food and drink sellers, shop workers and admissions staff are also wanted. http://goo.gl/XVtXVF

6. Alton Towers to recruit 1,200 seasonal staff: Alton Towers has launched a recruitment drive for 1,200 workers, the Staffordshire theme park wants to bring in seasonal workers. Bosses are aiming to bounce back with the jobs announcement a month a week ahead of plans for a new ride being unveiled.Resort recruitment manager Kerry Alcock said: “All of our recruitment is done via an on-line application form through our website and because our business is so dynamic, we never really have a quiet period – applications come in every day from the day after we close. When we’ve got new attractions planned to open, as we have next year, this encourages even more people to apply.” http://goo.gl/iqzNbt

1. Hundred jobs up for grabs as £4m casino heads to Wolverhampton: A recruitment drive has been launched to fill 100 new jobs at a £4 million casino in Wolverhampton.Under plans, The Rubicon Casino in Temple Street will expand into the empty neighbouring building, formerly The Dorchester/Beach nightclub, to create Casino 36.It is due to open next year. http://goo.gl/u7Auqz

2. New Dudley pub creates 45 Jobs: A pub restaurant chain has opened a new site in Dudley creating 45 jobs.The Harvester has opened in the former Bostin Fittle pub, on Castlegate park off Tipton Road.It opened after a four week closure when the work and recruitment drive was undertaken.The new Harvester has capacity for more than 150 guests and has created 45 new jobs in the local area. http://goo.gl/p9TuUQ

4. 21 Jobs on the way at award winning hotel: An extra 21 jobs could be created at an award-winning hotel near Kidderminster.The owners say the hotel is a significant contributor to the local economy and that a further 11 full-time posts and 10 part time posts would be created. http://goo.gl/hBHt9t

5. Walsall’s boatyard set to become restaurant creating 12 jobs in the process: A 19th century boatyard on Walsall’s waterfront will be turned into a flame-grill restaurant, creating 12 jobs.Restaurant chain Piri Fino will convert Wharfingers Cottage into a 60-seater eating spot after a planning application was approved by Walsall Council.http://goo.gl/A4DkiI

1. 300 jobs up for grabs at Wiggle in Bilston: More than 300 jobs will be created at the Bilston distribution centre for online cycle shop Wiggle. Wiggle opened its doors in Bilston in August and created 150 new roles. Now the firm says it is expected that 500 people will be employed at the site in the next three to five years. http://goo.gl/IkBu0V

2. Essington Golf Club expansion to create 60 jobs: A nine-hole golf course is currently being built at the club in Essington and is due to open at the end of next year, creating 50 jobs. But bosses have now submitted plans to extend it to a full size 18-hole course, costing £2m and creating an extra 10 jobs. http://goo.gl/XpnKbx

4. 60 new homes to be built in Dudley creating 180 Jobs: Up to 180 jobs will be created as under plans to build 60 homes on an ‘eyesore’ factory site on the edge of a Dudley nature reserve.The scheme is earmarked on the former Kuehne and Nagel UK buildings in Netherton.The project would create around 180 construction jobs according to developer Persimmon Homes West Midlands. http://goo.gl/onJd9F

5. Advanced Computer Software Group’s new move to the Mail Box creates 400 Jobs: Around 400 jobs are set to come to Birmingham after The Mailbox secured a new tenant for its revamped office space.Advanced Computer Software Group (ACS), which currently has a base on Birmingham Science Park Aston, has agreed a pre-let deal on 45,000 sq ft of space in the mixed-use complex. http://goo.gl/XDzaF1

1.New £16.6m Jaguar Land Rover grant to create 200 jobs: George Osborne was  in Wolverhampton today, announcing up to 200 jobs will be created in the Midlands as he pledged £16.6 million to form a new team led by Jaguar Land Rover. http://goo.gl/GbtpFE

2.200 jobs up for grabs at Black Country taxi firm : Go Carz is still after 200 drivers to join the team and in the wake of news of jobs losses at Caparo and Goodyear, the firm is calling on people out of work to come forward. http://goo.gl/hs6GVA

3.New £115m Designer Shopping centre in Cannock will create 1,200 jobs: A designer outlet village with 132 high-end shops and restaurants will be built in Cannock bringing in 1,200 jobs after plans were approved. http://goo.gl/kQxK5E

4. Pub Group Punch is renovating 5 Pubs across the midlands creating 50 jobs: The Staffordshire-based group is pumping money into a makeover of five of its pubs in Walsall and another in Cannock ready for the festive season.All within 10 miles of each other, The Shire Oak on Lichfield Road, The Watering Trough on Ablewell Street, The Farmer’s Boy on Barns Lane, Rushall, The Bowman on Myatt Avenue, Aldridge, and The Hen House on Eskrett Street, in Hednesford, are all being given a new lease of life with refurbished premises. In a further boost, a total of 50 jobs have been created across the venue. http://goo.gl/gkJT7q

5. West Brom based Purity Soft Drinks expansion plans creates 15 new jobs: A Black Country soft drinks business plans to increase the number if employs by another 15 over the next three years. http://goo.gl/FjaiOB 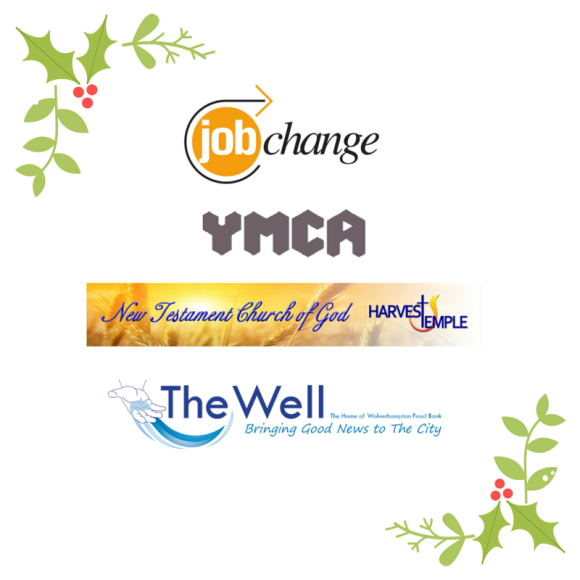 Give a Helping hand to those less fortunate this Christmas.

Every year Jobchange organises a fundraising event for people less fortunate than ourselves and this year we have decided to support 3 Food Banks that have become vital to some of our customers and others in and around Wolverhampton and Walsall.

We ask if you would kindly organise donations that we can pick up and drop into our collection point at 10 Red Lion Street,Wolverhampton.Thank You.

1.Work begins on £5m care home that will create 50 jobs: The new home in Kent Road, Halesowen, is due for completion in September next year and will create 50 Jobs. http://goo.gl/FGPyMj

2.Panto season jobs up for grabs at Wolverhampton’s Grand Theatre: The temporary festive jobs will be available during the panto season.The theatre, in Lichfield Street, is advertising for front-of-house staff who will need to mainly work during weekday matinee performances and be available for a minimum of three shifts a week. http://goo.gl/ZIjMxd

3.Bushbury Water cooler company to create 60 jobs: Angel Spring wants to add a two storey extension to its offices and create 30 extra parking spaces.The firm currently employs nearly 100 staff at the site but revealed this could grow to more than 160 with further expansion and investment. http://goo.gl/4wkL0g

5.New Birmingham Wholesale markets to create thousands of jobs:The site will deliver more than one million sq ft of floorspace, 1,000 new homes and 3,000 new jobs, adding £470 million a year to the local economy and attracting millions more visitors to the region http://goo.gl/cIT6fe

2. 400 new jobs set for Longbridge as retailers sign up for town centre: Six new retailers have signed up to St. Modwen’s Longbridge Town Centre scheme and are preparing to open in time for the busy Christmas shopping period, creating more than 400 jobs.Well-known household names Boots, Poundland and Mountain Warehouse are taking a total of 17,500 sq ft of space in the new retail units next to Marks & Spencer. http://goo.gl/2gwPbe

3. KPMG creates 20 new jobs in Birmingham with small business accounting centre: KPMG in Birmingham has created 20 jobs with the opening of a new delivery centre in the city for its Small Business Accounting service.  The Small Business Accounting service gives customers unlimited access to a dedicated KPMG accountant responsible for all their accounting, bookkeeping, tax and payroll needs.http://goo.gl/muccnf

4. Wednesfield’s new trampoline activity centre will create 90 jobs: Pete Brown, Air Space’s operation manager comments: “We are delighted to offer residents of Wolverhampton the opportunity to work in such a great environment, with fantastic training and career prospects. http://goo.gl/xpEZUE

And many more at places such as Argos,Currys PC World and jewellers H Samules to name a few.http://goo.gl/23d7gY

2. A New Costa Coffee Shop will create 15-20 jobs:A Costa Coffee drive-thru is planned for the i54 business park on the border of Staffordshire and Wolverhampton If approved, the plan would create new jobs in the area, believed to be around 15-20.http://goo.gl/I2oEpq

1.Yodel Delivering 1,200 Jobs for the Midlands:Yodel, the national parcel carrier with its centre in the Black Country, is delivering a festive employment boost with nearly 1,200 seasonal jobs for the Midlands in the run-up to Christmas.http://goo.gl/qiSM0J

5.Multi-million Birchley Island restaurant gets go-ahead:The restaurant between the island and the M5 slip road will create 80 full-time and part-time jobs and be part of the Greene King’s Farmhouse Inn brand http://goo.gl/MKzkAH